Cash for cans? What you need to know about the government’s new recycling reward scheme

Every year, people in the UK use nearly 14 billion plastic bottles and nine billion cans, the majority of which end up in landfill or are littered on our streets instead of the recycling.

Plastic pollution is a massive issue, not only because it can damage our local environment, but because the creation of plastic and the natural degradation of it in landfill releases greenhouse gas emissions.

By 2030, the creation of plastic could lead to 1.34 billion tonnes of extra greenhouse gas emissions, according to the Centre for International Environmental Law – and our obsession with consuming juice, soda, and other drinks is a big part of this problem.

To combat this, the UK government has announced a brand new scheme that aims to make recycling plastic bottles and metal cans more convenient than ever before.

The scheme will allow people to return their bottles and cans for recycling and receive cash in return, further incentivising people to recycle in the first place.

Here’s everything you need to know about the new recycling scheme, and what it means for you.

How will the scheme work?

People will be able to go to designated sites where a “reverse vending machine” will be installed to return their bottles and cans and receive cash back.

The government has said they anticipate retailers, such as supermarkets and corner shops, who sell drinks in these containers to host these machines, but this has not been confirmed.

At this stage this is no more information about how much money people will get for recycling their bottles and cans, or how many designated sites around the country will be installed.

The Deposit Return Scheme (DRS) will be modelled after schemes in Germany, Finland, Norway, Sweden, and Canada, all of which have recycling rates above 90 per cent, as it will aim to collect at least 85 per cent of all recyclable bottles and cans.

Your support changes lives. Find out how you can help us help more people by signing up for a subscription.

Why has it been implemented?

The DRS will aim to boost recycling efforts in the UK and reduce plastic waste in landfill. Currently, only 70 per cent of drink containers in the UK are recycled.

Environment minister Rebecca Pow said: “We want to support people who want to do the right thing to help stop damaging plastics polluting our green spaces or floating in our oceans and rivers.”

“This will provide a simple and effective system across the country that helps people reduce litter and recycle more easily, even when on the move,” she added.

Break the cycle of poverty for good

Big Futures is calling on the Government to put in place a plan and policies to break this cycle of poverty for good. We are calling for long-term solutions to meet the biggest issues faced in the UK today – the housing crisis, low wages and the climate crisis. Dealing with these issues will help the UK to protect the environmental, social, economic and cultural wellbeing of future generations. So that young people and future generations have a fair shot at life. Join us and demand a better future.
Sign the open letter

What has the reaction been to the recycling scheme?

During an initial consultation with the public, the government found 83 per cent of people who took part were in favour of the DRS.

Many climate organisations have welcomed the news but also criticised the government for missing the mark because the DRS will not be in place until 2025 and crucially excludes glass recycling.

Research director at Green Alliance, Roz Bullied, said: “It’s incredible that it’s taken so long to introduce something other countries have been doing for years. We need to get quicker at putting policies in place if we’re really serious about the environmental crises we’re facing.”

“We cannot continue to ignore the UK’s chronically low levels of glass recycling,” Sian Sutherland, co-founder of A Plastic Planet said, calling for an “all-in deposit scheme” across the whole of the UK.

Get the latest news and insight into how the Big Issue magazine is made by signing up for the Inside Big Issue newsletter.

Wildlife and conservation organisations have condemned the exclusion of glass too, including Keep Britain Tidy’s chief executive, Allison Ogden-Newton, who said glass is “one of the most dangerous forms of litter for people, pets, and wildlife.”

“The government wants the UK to be a world leader in addressing the waste crisis, but by excluding glass from the deposit return scheme they are making a mockery of this pledge,” wildlife campaigner Dominic Dyer agreed.

Greenpeace UK and Green Alliance also criticised the delay in introducing a recycling scheme of this kind, five years after the government first promised to create a DRS in their 2019 manifesto pledge.

Megan Randles, political campaigner at Greenpeace UK, said there has been “five years of wasted action on plastic waste. Five years of dithering and pollution”.

She said while the scheme is “better than nothing”, it isn’t doing enough, adding: “If we’re serious about leaving a better natural environment for future generations, kicking the can down the road just doesn’t cut it.”

Read All
Looking to be more sustainable? Here's our top 10 tips to reduce your carbon emissions

Looking to be more sustainable? Here's our top 10 tips to reduce your carbon emissions

Renewable energy: How does the UK compare to other countries?

Renewable energy: How does the UK compare to other countries?

Why was Greta Thunberg arrested? 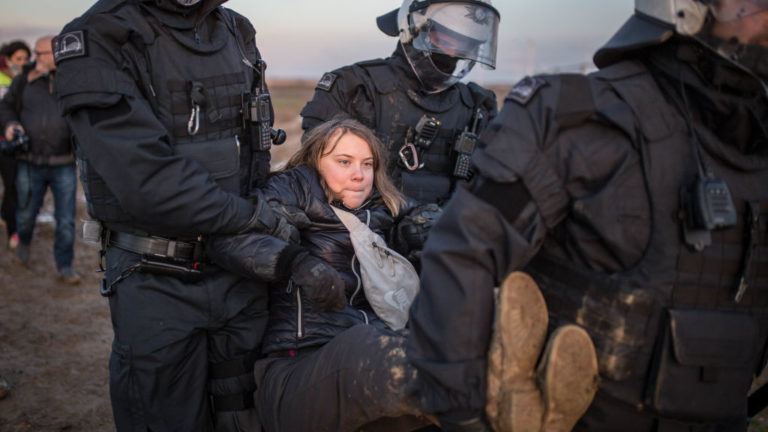 Why was Greta Thunberg arrested?